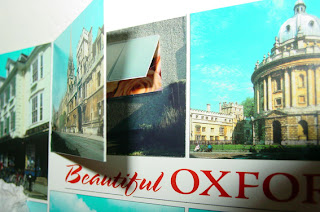 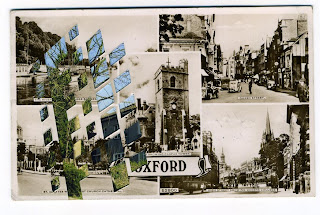 These postcards edited to include the suburbs of Oxford comments on the relationship tourists and outsiders have with famous cities like Oxford and Paris – and the way these cities present themselves to visitors.


Hi Suzy,
It was good to catch up with you last night at Besame Mucho. It was such a fun event, with some interesting and quirky performances. I particularly enjoyed Holly Pester’s performance (about “steam coming off men”)!

I’ve uploaded pictures from my walk up the Cowley Road from The Plain to the ring road (see www.flickr.com/photos/barbaresiandround). I just have one more leg of the journey to do – from the ring road to Blackbird Leys. The first part of the walk is an overload of visual information. There are so many eccentric shops and signs, and numerous interesting businesses that reflect the multi-cultural area. The richness and colour of this part of the road make the remaining section from Magdalen Road to Temple Cowley seem very bland. There are fewer pedestrians here and the houses are tatty and faded. Every now and then there is a glimpse of open green space where there are allotments or common land.

I’ve been dipping into a book by Lucy Lippard called ‘The lure of the local’. She makes some astute observations about city dwellers…
“The urban ego is in fact parochial; New Yorkers (like Parisians or Bostonians) are among the most provincial people in the world. They are often as bound to their own neighborhoods and as ignorant of the rest of the city (aside from midtown) as any small towner. A city is a center plus the sum of its neighbourhoods, a collage created by juxtaposing apples and oranges…”.
We’re so unadventurous – but I wonder why this is? And why would I feel quite comfortable walking in some areas of Oxford, whereas in others I feel like a trespasser?

It was great to see the postcards you had made for Besame Mucho – and to see both sets of cards together. I am putting up a couple of pics I took of mine, and will photograph yours as well once they’ve been returned.

Rachel
Posted by Barbaresi and Round at 04:33