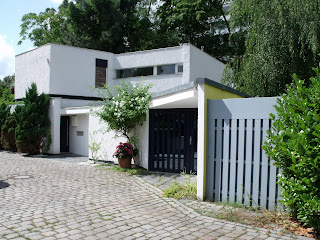 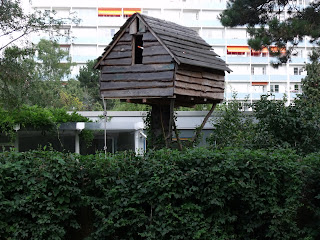 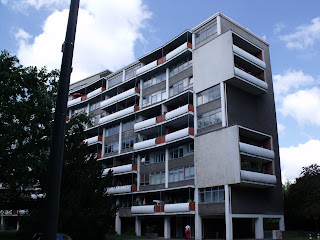 Some more images from the Hansaviertal including some Mies van de Rohe bungalow villas.
Posted by Barbaresi and Round at 13:53 No comments: 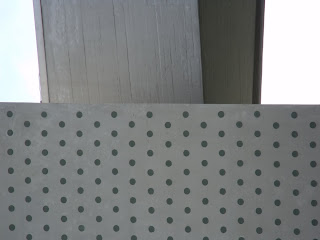 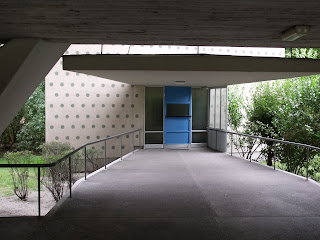 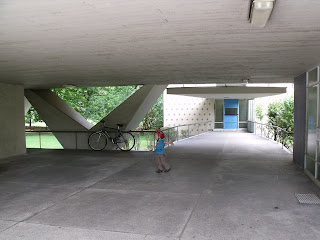 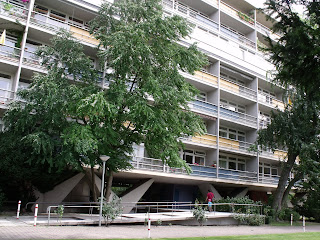 Some images from an amazing collection of residential buildings. Its called Hansaviertel and occupies a space at the edge of the Tiergarten, so very green and central. They were built in the 1950's by high profile architects like Niemeyer, Mies van de Rohe, Alvar Aalto, Egon Eiermann, Walter Gropius. The residents obviously cherish them and they are immaculately maintained. There are a couple of churches and a library built as part of the estate. The first few images are of the Niemeyer.
Posted by Barbaresi and Round at 06:01 No comments:

We made a trip out from Berlin to Eisenhüttenstadt, almost on the Polish border. Its an 'ideal' town which was founded in 1950 as a model town alongside a steel mill. Some of the architecture is Stalinist Neo-Classical, and the later architecture Plattenbau (pre-fabricated)

After reunification the competition from West German steel makers and the collapse of markets in Eastern Europe meant they had to lay off workers. In 1995, the steel mill was privatized and sold to the Belgian steel maker Cockerill-Sambre, now part of Arcelor Mittal. As a result the population has gone from 53,048 in 1988 to 34,818 in 2005. It is unbelivabley quiet, and we were there on a saturday afternoon.
Posted by Barbaresi and Round at 00:52 No comments:

Been to see this show at Stedefreund. The project is inspired by the 20th anniversary of the fall of the wall, and explores the idea of boundaries in the city in different ways. So really interesting for us. There was one piece based on an illuminated kebab sign, by Inken Reinert. The artist talked about how he grew up in west Berlin where there was a Turkish community and so Kebab shops were familiar, When the wall came down he moved to East Berlin and remembers the first Kebab shop arriving, and the surprise and initial awkwardness from residents.

Its almost too obvious a point to make, but the Berlin wall is perhaps the clearest example of some of the issues we explored in 'Oxford / Paris Correspondence' In some ways the wall is now physically invisible for large parts of its route. But other indicators like forms of social housing, or communist monuments feel quite poignant. Talking to people of our age who grew up in the DDR there seems to be a sadness that their history is being neglected, and major DDR buildings not well maintained.

We have made quite a lot of trips further east. (especially to a geogeous lake Orankesee to swim) And although Prenzlauer Berg where we are staying is funky and fun old east Berlin, not far way it becomes quite bland and monolithic and there seem to be differences in styles and habits.

Sx
Posted by Barbaresi and Round at 01:26 No comments: