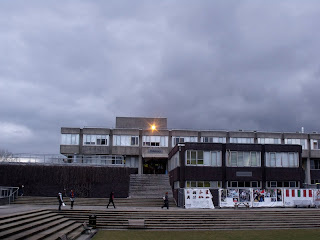 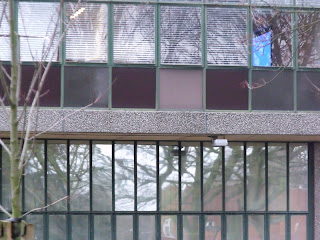 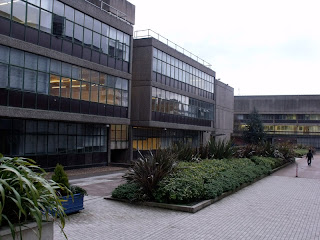 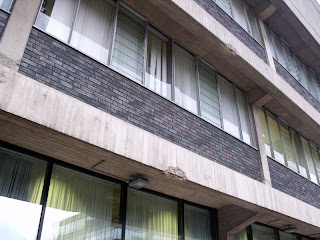 I've put the photos of Brunel University on www.flickr.com/photos/barbaresiandround and found out a little about the history of the Campus at Uxbridge.

It came about from the radical changes made in further education post-war, whereby each education authority had to submit plans for its own area with a view to meeting the growing needs of the population. Brunel university was a development from Acton Technical college. In 1957 it was decided that the facilities at Acton were holding back the college's growth. One site contintued at Acton with National Certificate and craft courses, and approval was given for the site at Uxbridge to focus on technology and was called Brunel college of Technology, then was granted University status in 1966. In 1971 it left the Acton site and the whole University was brought together at Uxbridge.

The site and buildings were designed by Sheppard, Robson & Partners www.sheppardrobson.com and the main phases built in 1965-7. The idea of the students feeling loyalty to the University as a whole rather than just departments was important to the concept. The buildings are interconnected and are designed to bring students of different discaplines together.

S
Posted by Barbaresi and Round at 09:39 No comments: