Hi Rachel,
We didn't buy the catalogue as we have a huge book with much of the same material in it, languishing in our garage in Forest Hill! but I will go back with my camera. I feel we are getting to the stage where we could start to make plans for other pieces of work. Not necessarily to begin them yet, but to enable our research to be more focused.
S
Posted by Barbaresi and Round at 05:38 No comments:

Hi Suzy,
The Team 10 exhibition sounds interesting - especially as you could see the dialogue that took place between European architects.
I like the way you describe the displays, and the idea that we might use similar approaches in the way we display our work. Did you take pics of the exhibition? It would be so useful to see. There is an element of deconstruction and re-invention in the way we work and a multi-faceted and organic means of displaying material makes sense with that. I think there was an element of this in 'New for Old' but it would be exciting to push this much further.
The way medieval architecture informs a new build in Giancarlo de Carle's referencing of the medieval city of Urbino in his designs for 'Collegio dell Colle' is very interesting. Perhaps we could find out more about this? Again, this relates to our on-going interest in the medieval city.
I really like the idea of pushing the use of flexibility in our work and encouraging more interactivity. Again, 'Sprawl/what gets carried by the river...' had this potential, and I think some parts were re-arranged by children (!), but we could make this an integral part of the work.
Was there a catalogue for the show? Perhaps I can get hold of a copy.
Rachel
Posted by Barbaresi and Round at 04:11 No comments: 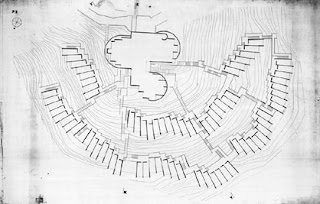 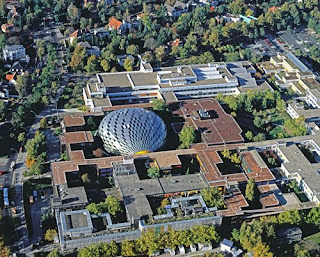 We have just been to a show at the Cité de I'architecture http://www.citechaillot.fr/index.php in the 16ar. It's about Team 10 http://www.team10online.org

Its interesting for us because these people were at the forefront of ideas in European architecture from the 50's to the 80's. Behind a lot of the ideas that we admire. They saw themselves as having moved on from Le Corbusier rather than advocating a self referential modernism, considering historical context, local issues much more.

The exhibition had a huge mixture of archive material - original drawings, videos of the sites when they were being constructed similar to our archive photos of Thamesmead. I liked the way the show was displayed, it felt visually rich and inventive as spacial, social, political and aesthetic issues were explored through imagery, using collage, photo montage. Mostly displays of team 10's original work.

These were exploratory works made before building. But it made me think about the contrast and similarities to our work that we make responding to architecture from this period maybe 40 years on. There might be clues in the language that they use that could inform our work.

2 ideas stood out for me from the show. One was from a building by Giancarlo de Carle 'Collegio dell Colle' part of the University of Urbino 1962-66. from the exhibition blurb......'The building is conceived as a small city, a sophisticated complex of relationships between spaces and their inhabitants and their experience of the environment. De Carlo drew inspiration for this organization from the structure of medieval Urbino....there is an obvious analogy between the system of pathways, stairs and terraces at the Collegio dell Colle and the intricate network of street and squares in the historic city of Urbino'

See http://www.studioargento.com/GDC/ for quicktime look around the building

The other was flexible structures. Team 10..... 'developed various models for minimal structures within which the city or a building could develop flexibility and provide space for different forms of appropriation by individuals or groups.' One example is from the Freie Universitat in Berlin, the Humanities and Social Science Centre or 'web building' which consisted of a layered composition of flexible floor areas, patios, and streets. The intention was that the building could develop with the layered areas as an open institution in which boundaries between faculties blurred and and spaces are adapted by students and professors.'

It made me think about how our work can be shown differently depending on the gallery space, and especially your constructions for 'Sprawl: what gets carried by the river' and the way that they could be to some extent moved by the viewer. I wonder if we could expand this idea and made work that can be deliberately transformed in several ways by the viewer. I quite like the idea of us as the makers losing some control.

There was also a video of Alison and Peter Smithson taking about social problems on estates and the architect's responsibility, which i would love to find a transcript of.

S
Posted by Barbaresi and Round at 13:00 No comments: