s denis is to the north of paris. and meant to be quite a rough
suburb. s denis is an historic town inits own right with an amazing
cathedral. There is a story about the man s denis being beheaded and then carrying his own head to what is now s denis the place to be buried where the cathedral now is. see photo of the relief above the entrance to the church later.


Almost in the centre are some very bold 60's /70's estates. The first
image shows flats above shops. Then we walked around an estate where there were several blocks built to the same model. The homes seem to be over 2 floors. Then we came to a small play area that opened on to a path next to a huge wall with a gate, that seemed like a city wall but was the wall of the cemetry. It must be about 300 years old. It was an interesting contrast. The estate felt like a fortress too, but with a very clean line to the architecture. See photo of matt walking towards the gate. So the cemetry formed the edge of the estate. See also photo of us 3 to get more of a sense of the wall.

As we walked around the path by the wall there were some lights on the ground, designed as part of the estate. See more photos of the estate. Including some of graffiti with 93 which is slang for the for the area of s denis, the post number for the area
begins with 93 as opposed to the more elitiest 75 for paris.
There are 'banlieusards' who are proud of belonging to the 93.


another image of 93 grafiti, it reminds me of the TM symbol from the gangs in thamesmead. Then part of a building by Oscar Niemeyer, the architect of Brasilia who is now in his 90's. He is an old communist and it is the headquarters of the french commi newspaper. Its presence seems to add to the sense of opptimisum in collective living which the architecture of the estates suggest. I have more photos of the Niemeyer building.

Then there is the relief above the entrance to the cathedral. we then
got the tram over to Bobigny which is to the north east of Paris.
There was obliviously a huge building program there in the 60/70's.
There is a series of high-rise blocks in a landscaped setting,
Stretching perhaps for several km. We went on a beautiful Saturday
Afternoon, but you could imagine there being rough elements there. We saw a couple of bags which had been nicked lying on the ground with contents scattered around. The building with the terraces with plants is the town hall. I also took a close up of someone’s app in a high rise block, washing like in TM, but made me think about the prefab architecture and people’s individual homes within a collective structure.

Now there are a couple of images of a concrete pedestrian bridge over a road. It’s a bit like the optimism of the car in the planning of TM and also there was an estate that Matt and I saw in Berlin that had a motorway literally running through the centre of it. I do like the sense of different levels and walkways. Medieval city where everything is jumbled up, creates an interesting sense of space and perspective.

There was also a church obviously designed as part of the
Development. I like the way the language of the flats is made into a
Religious building. Thinking about all the needs of the residents. The sparseness and simplification of the architecture feels religious, the less there is the more each element gains significance.
There is another Niemeyer building in Bobigny which is the job centre!

Here is a photo of part of the building with the high-rise flats
Behind and another of the job centre with the flats reflected in the
Glass wall. Wow B has been asleep for ages which has enabled me to send you these.

Its all a bit note form, but its good to get my thoughts down. I was
also thinking about the relationship between these and TM and E8,
Coming as an outsider, it’s a very different relationship. I feel that
This element of my response needs to be built in as something positive a bit like the distance between us, rather than trying to compensate for it. 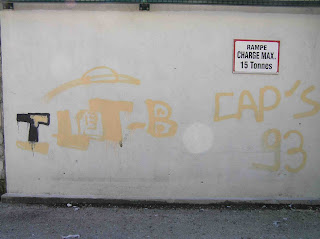 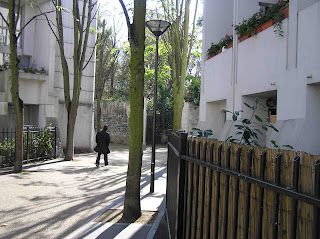 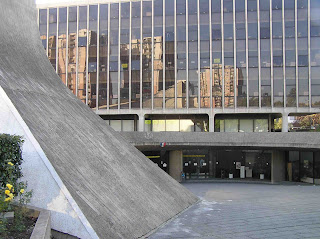 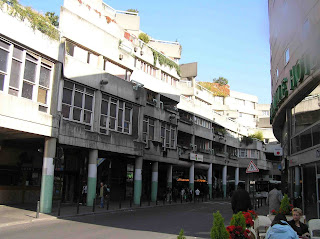 Posted by Barbaresi and Round at 02:29