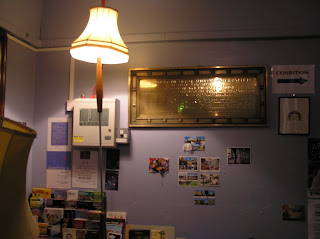 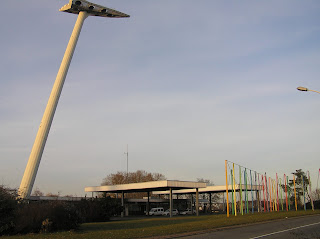 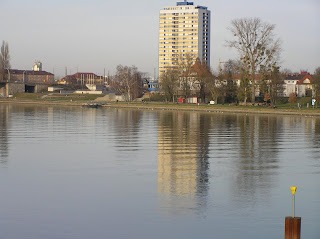 Here is an image from the show at Chats Palace, showing our postcards in the context of all the leaflets and postcards normally on display.

Also I thought you might be interested in some images I took while in Strasbourg. We took the bus accross the boarder to Germany. Its about a 20 min journey to Kehl. The countries are separated by the Rhine at this point. But Strasbourg has been part of Germany historically and the Issenheim Alterpiece which we went to see in Colmar was painted by Grunewald when Colmar was in Germany. (really worth seeing)

Anyway being british its intriguing to see what happens at a boarder when the countries are part of a huge land mass. It was very banal, no sense of occation or anything really to mark it. Derilict police stations on each side. Which must be a good thing. And people taking sunday stroles on either side of the bank.

I think there is a link with our ideas about cities and teritory and where places begin and end or fade out. We have been thinking of it in terms of areas within the urban environment but maps and boarders can be controvertial and political. (Kosovo was created yesterday but not everyone agrees) As i think they are too on a smaller scale in cities (living somewhere implys social status, opportuties or lack of etc), sometimes areas are teritories but with no obvious boundary. I was interested in Isolarion when James Attlee talks about the plans to give Cowley road some demaration and how against it he was.

He quotes from Walter Benjamin p88"Nowhere except perhaps in dreams, can the phenomenon of the boundary be experienced in a more originary way than in cities. To know them means to understand those lines that, running alongside railraod crossings and accross privately owned lots, within the park and accross the riverbank, function as limits...A new precinct begins like a step into the void - as though one had unexpectedly cleared a low flight of steps."

I was also thinking about Iain Sinclair's orbital, walking the m25 a kind of boundary for london and all the banal out of town developments that he finds there.

Sx
Posted by Barbaresi and Round at 01:52