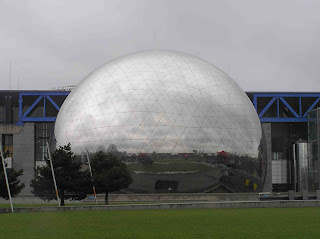 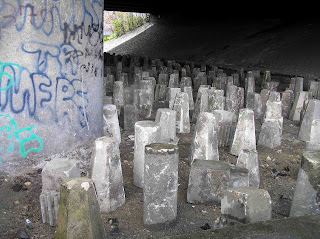 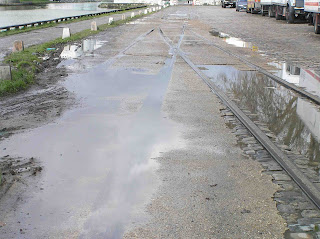 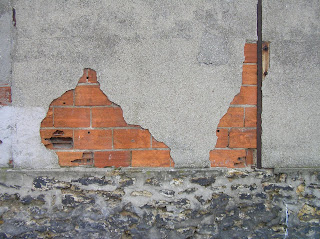 Matt, Barnaby and I walked to saint denis on friday, starting at Parc de la Villette, which is on the north east edge of Paris, close to la Peripherique. The park was designed in the 80's flatterning an area that used to be the city's main cattle market and abattoir. Reminds me a bit of centre Pompidou. Very dramatic buildings with a sense of humour. There are various museums there - Musee de la Musique, Cite des Enfants and La Cite des Sciences et de I'Industrie. Designed as a dramatic and ambitous space. All landscaped around the canal which divides here - canal de l'ourcq going towards the east and canal st denis running north towards the seine which we took.

The weather was so dramatic we almost gave up before we reached the Peripherique. Really dramatic wind and rain. But we settled for an intense drissle, B went to sleep in the pussette, and we were soon rewarded with some intermitant sunshine and rain.

Looking either side of us as we walked we could see a horizon for the first time in ages and some industrial semi derilict spaces that you don't really encouter in Paris. It reminded me a bit of the canal near my old studio in Hackney Wick. Matt and i both relaxed and felt more cheerful than we had in ages.

We came across a collection of curious carved stone shapes a bit like traffic cones under a bridge. We can't imagine what they are for or why they are there. They seem like figures or an archeological ruin.

From the top of a bridge I took a couple of pictures of the panorama. There were so many different kinds of spaces and buildings. Reminded me of Jeff Wall's 'A Sudden Gust of Wind'.

What happens on the edge of a city? I'm interested in the Peripherique as a boundary. It's just a bland, grid locked motorway. I took a couple of photos of as it goes over the canal. Nothing like the sense of occasion that you would have had with a city wall.

There are lots of traces of derilict industary, Like train tracks on the canal tow path, and more recent detritis like a keyboard under a tree and loads of rubbish in the water.

Some buildings had been knocked down and the site was over grown. I am always fasinated by homes that are half pulled down so you get a sense of the rooms and elements from the interior, thrown up in a space that feels very far from domestic. We passed apartment blocks and houses with some of the windows bricked up and others missing. The semi derelict spaces create a sense of layering, decay and wear revealing what is underneath.

I saw some grafiti which reminded me of the modular form of Thamesmead graffiti, where the TM is combined with names or names of gangs. Here was 'Pop' with the '93' postcode of Saint Denis.

Across the road we saw the Stade de France where England was defeated in the friendly last night. Saint Denis was suddenly there much quicker than we had imagined. I approached the canal to take a last picture with the RER station, when a man from a group of homeless people came up to me shouting. He was very concerned that I wasn't going to take a picture of them. And demonstrated how he would throw my camera 'dans la Seine' if I did. Thinking of ourselves as 'urban tourists' How you view and record other people is a very sensitive subject. I guess people's environment is an extension of that.

We spent some time in saint Denis, we were struck by the lack of white or seemingly middle class people around. When we left the RER station was crowded and there was a sense of agro due to the huge queues for tickets and lack of staff. It is clearly not as well managed as stations in Paris. Chatting to Parisians about our walk, I am constantly met with surprise that we would want to go there from people who have never been.

S
Posted by Barbaresi and Round at 13:45