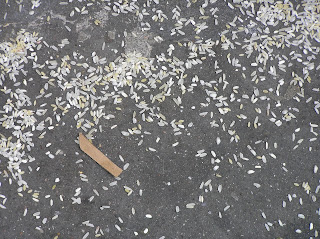 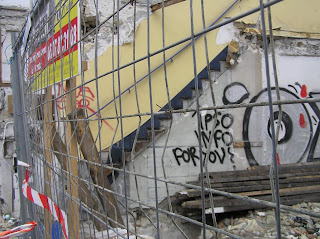 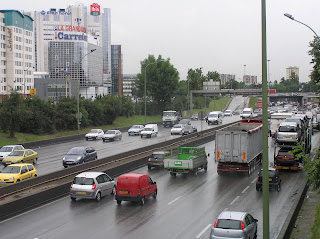 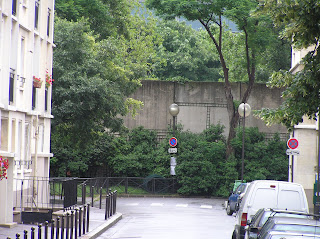 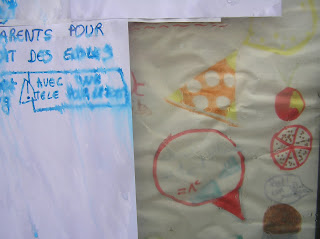 Decided to take a walk with B asleep in the pousette. Again from Porte Bagnolet, but going south. I took a photo of some rice on the pavement, I like the random sense of distribution, and the way it is like a miniature view of a larger street scene.

Exploring the area a little, I walked down Blvd Davout. A building had just been demolished I was interested in the indication of the stairs on a wall and the remains of the electric circits.

Back to Porte Bagnolet via some side streets. And there was an incredible down pour. In spite of the cover for the pousette and my brolly it was impossible to walk without getting soaked. so i took shelter in the porch of an appartment block and ate my sandwich. When it calmed down enough to walk i set off down Rue Henri Duvernois as close to the Périphérique as possible. The same block where I had been taking cover followed the curve of the road forming a barrier or protection from the Périphérique.

Then into Rue Louis Lumiére. Lots of sports grounds and a couple of schools. There is a footbridge over the motorway so I went back for a better look. There are loads of glass block office buildings and illuminated company logos advertising to drivers.

There is a nice block of public housing with terraced balconys like Thamesmead. I pass Porte de Montreuil and soon get to Porte Vincennes. By Porte Vincennes there are lots of 50's looking housing developments here and some businesses that seem to have been built into the estates. Including 'Prothèses Dentaires'.

S
Posted by Barbaresi and Round at 04:07