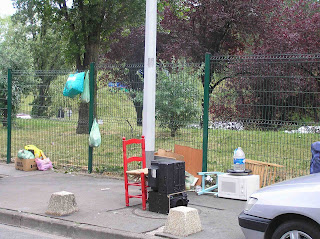 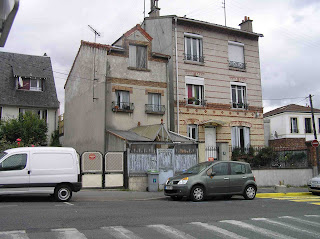 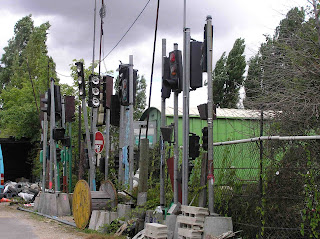 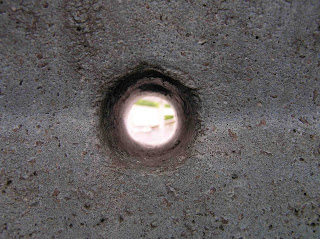 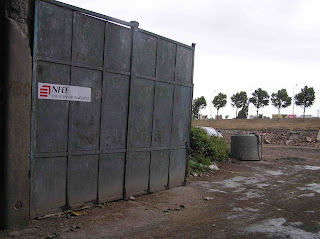 As time is short before leaving Paris, I've decided to use the Velib - the public transport bikes available everywhere in Paris, for the rest of the Périphérique while M takes care of B.

I started at Porte Bagnolet, heading north. It's a huge roundabout, but with excellent cycle crossings on segregated pavement with own traffic lights. No problem for non-car users to cross from Paris to the Banlieue here. Lots of big office buildings around the roundabout with illuminated logos facing the traffic.

The other side is Bagnolet. There is such an instant contrast with Paris. Most strikingly there are lots of houses, rather than just apartments. Some of them look quite individual and a bit jerry built, little funny extensions added by the owners presumably.

I take a tiny side road that goes right next to the Périphérique, now in a cutting, with metal railings preventing any pedestrian contact. Tipped all over the pavement and spilling on the the road are piles of dumped objects. There is a wird feeling of the domestic cropping up out of context with a little red painted chair and television. Lots of belts, shoes, circuit boards. A total paradise for found objects. Not sure where they would have come from or why so many here. Luckily for M, i didn't have a wheel barrow handy, but did pick up a few things we can use.

A bit further on I passed an overgrown car park with some of disused ambulences rotting.

Crossed back into Paris at Porte Lilas. Lots of building development here. High rise on the Lilas side - not allowed in Paris. And 'un jardin écologique pour tous' I took Blvd Serurier to burn some km on the Velib. Passed a scrap yard with a collection of old traffic lights. More no-entry signs to prohibit access to old machines designed to control access.

Carried on speeding downhill, passed 'Archives de Paris' then had to avoid tunnel leading to Périphérique with no cyling signs. I used the pavement to reach Parc Villette, as the one way was against me, where we began the walk along the canal to st Denis(would have been big detour for bike around 1 way system). I saw a bold modern church, Sainte Claire facing Porte de Pantin which seemed to be designed to work with the huge roundabout.

Blvd Serurier becomes Blvd Macdonald. The train lines from Gare du Nord and Gare du Est run through here and seem to function a bit like a definition of the city for an earlier time. I pass another piece of waste ground that looks earmarked for development. 'Eau & Environment' and posters for 'un nouveau quartier de Paris Nord-Est' Then come to Porte de la Chappelle. It's now raining hard and some homeless people are taking cover under a make-shift shelter made from old furniture and plastic sheeting right on the roundabout.

S
Posted by Barbaresi and Round at 07:19