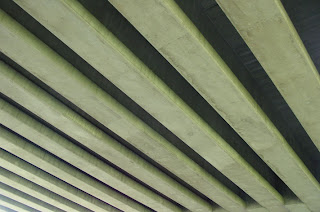 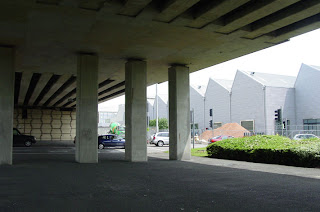 Underneath the ring road with Cowley Works in the background.


Hi Suzy,
I went for a walk around part of the Cowley works today where BMW make minis. This was originally the production line for Morris and many people living in East Oxford worked there.
The works occupies a huge site adjacent to the eastern bypass. At one time the works were also located on the opposite site inside the ring road. This has now been turned into a business park with boxy glass office buildings surrounded by landscaping and manicured lawns. I wasn't sure if i'd be able to cross the junction that connects the cowley works and blackbird leys to the city as a pedestrian, but decided to try. It was actually fine - with pedestrian crossings enabling office workers to get to shops at the nearby retail park.
I followed the Garsington Road, going under the railway bridge of what is (i think) a disused train line. Passing a few random shops and businesses including a barber's and Lidl I turned left into Transport way, hoping to get closer to the Cowley Works.
On the left I passed another clunky glass office building - impeccably maintained - but most other buildings were shabby and semi-industrial. After this I could see the Cowley works from the rear with huge car parks where minis were being loaded onto transporters, and behind this the factory buildings. As I continued walking i passed a gas tower, derelict 70's industrial unit and some other businesses.
AT one time it would have been possible to cross the middle of the Cowley works on an old bridleway that connects Blackbird Leys with Brasenose Farm and Shotover Park beyond the works. BMW gained planning permission to block this right of way at the end of last year. This has caused a big outcry among locals who use the route to get to work, and horse riders.see http://www.iwca-oxford.org.uk/blackbirdleys/news/nws06020.htm
A pedestrian and cycle route is being created along the eastern bypass but apparently there is no provision for horse riders. The eastern bypass is a very long way round as well as being an unpleasant route for pedestrians who say they will now have to drive to work. I've put some more pics up on Flickr.
Rachel
Posted by Barbaresi and Round at 13:37