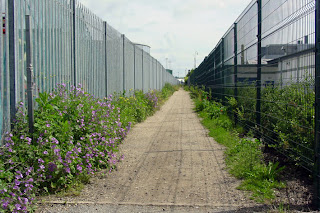 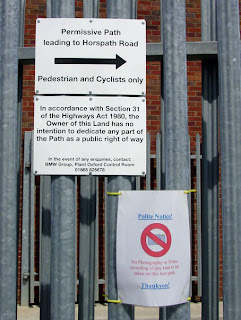 Dear Suzy,
I went back to the Cowley works today to see if i could access the bridleway. The pavements are being dug up around the edge of the works near to the Eastern bypass and on the Garsington Road. This must be the alternative route that is being created. For the time being the bridleway is still accessible and so Zola and I went along it. You can see from the photo above that they have banned users from taking photos or video, but I thought one photo taken from outside the bridleway would be OK.
Despite being almost asleep in her pram when we started walking, Zola quickly woke up as there were lots of interesting things to see from a toddler perspective. Fork lift trucks were whizzing backwards and forwards to our left moving crates around. On our right car transporters were being loaded up with new minis.
It is easy to see why BMW are so keen to lose the bridleway and amalgamate their two sites. It must be logistically very inconvenient to have a divided site and security is probably more complicated. Nevertheless I felt a lot of sympathy for the people who want to use the path to get to work or to reach Brasenose Woods and Shotover Park. Walking along the eastern bypass is not an attractive alternative and would take much longer.
I was on the Bridleway between 11am and 11.30 am and two people passed me on bikes. It would be interesting to go there at a time of day when people are going to work and see how many people are using the path. I'm also curious to talk to people about how they feel about losing this right of way.
It took me about 10 minutes to reach Horspath Road where Stagecoach have a depot. On the way back I picked up some polystyrene packaging and noted a discarded disposable boiler suit which I will return for (didn't have a bag to carry it in and it looked a bit mucky!). The first finds for our 'collection'.
Rachel
Posted by Barbaresi and Round at 05:51