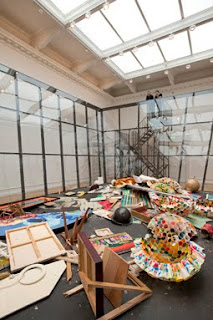 I took one of our postcards to the Art bin at the South London Gallery last weekend. Michael Landy was there and asked me about it. It was one of the bourse de travail or job centre designed by Niemeyer in the northern Parisian suburb of Bobigny.

I guess he wants to make sure that people aren't coming and putting their rubbish in it. But I had to fill in quite an official form about rights to the work and it was archived. I was looking at his tweet www.twitter.com/LandysArtBin and he was talking about peoples contributions. He seems to value things sent from a long way or where there is alot of effort or loss involved.

Sx
Posted by Barbaresi and Round at 00:47