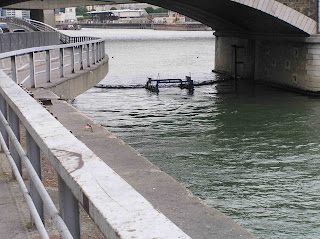 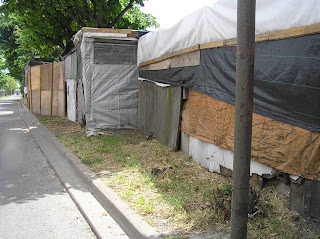 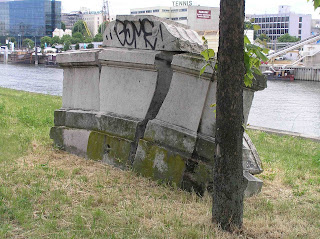 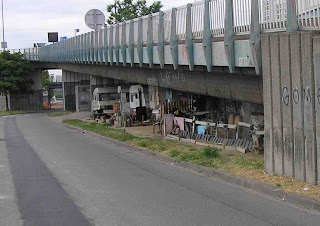 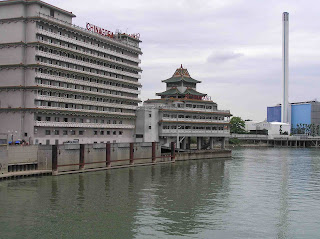 My walk started at the Parc Bercy, which is on the north bank of the Siene in the 12ar, it is elegantly landscaped with various institutions contained in the park like the Palais Omnisports de Paris-Berc with grass growing on the sloppy sides. and the Cinématèque Français. On the other side of the Siene is the Bibliotheque Francois Mitterrand, with 4 towers cornering a sunken garden like book ends. Connecting the two is the footbridge Simone de Beauvoir.

The park feels like the last place going east along the Siene where a pedestrian is meant to be. The road next to the river soon became the dual carriage way which leads to the Périphérique. As the road became more inhospitable there were barriers and wire fences to separate the drag along the river from the dual carriageway. Lining the edge of the river itself were a series of industrial estates, cement works and builders wholesalers, so I was sandwiched in only able to go on or back. I saw a long boat carrying sand pass down the river. I imagine that this area would have been a good place for industry historically using river for transportation of building materials and goods.

I was now walking on a small tarmacked path with sides like motorway barriers on either side. The white markings divide it into cycle lane and pedestrian. To my left the dual carriage way and to my right the river. It seems to be on stilts over the river at some points. There are signs telling me the pedestrian path is ending, but no way of getting out where I have got to but going forwards! I am a little hesitant as i am with B asleep in the pushchair, but carry on using the cycle lane. We cross under the Périphérique bridge which is a utilitarian concrete structure. Then suddenly there are signs telling me that the pedestrian path begins again. Not sure how the pedestrian was meant to get from where the last was to here, perhaps swimming or walking on the dual carriage way.

Just after the bridge I came across a fenced off area by the river with various things stored, eclectic pieces of building materials. Then there are a small number of shanty dwellings, made from plywood, tarpaulin, rope. Some are together like terraced houses, a few stand alone. They have quite robust doors with locks on. I saw a kitchen window with venetian blinds. A man opened a door, and started walking along the path towards Paris. He looked quite ordinary in a black shirt and jeans.

Then I came across what looked like an ornamental section of an 18/19th century bridge, standing alone on the grass by the river. I wonder why it was left there? perhaps the whole bridge was destroyed to make way for something else. Then a tent, another temporary home for someone.

Next I pass under the ponts Nelson Mandela which from the map seem to be part of a contra flow traffic system. I catch sight of some caravans under the slip road which leads onto the second bridge. As I get closer I can see it is a gypsy encampment. There some men sitting outside watching the river. In the space just where the bridge meets the ground I glimpse a constructed interior, there are hundreds of teddy bears and soft toys attached to posts with string. It looks fascinating, but I doubt the interest would be welcome, so I try to see as much as possible as I walk past, while attempting to look disinterested!

All this is happening just by the dual carriage way. I pass another place selling industrial materials.

Then I caught sight of the point where the Seine meets the Marne. As a key geographical point, I had anticipated something in the surroundings to mark it. But was greeted by a huge corporate Japanese pagoda type building. Bizarre and kitch. I pass by a sports ground and lots of noisy school children. B wakes up. There is some building work going on here so to reach the foot bridge crossing the Marne to the land in between I snake through temporary corrugated fences. The Marne feels like a big contrast to the Seine - much smaller and has a bucolic feel to it. I spot a submerged rubbish collecting boat in the water with a large teddy bear floating on top.

Over the bridge I am in Alfortville. I photograph some net curtains with a windmill motive. It makes me think of Emily Wolfe's paintings, an idealised piece of the countryside appropriated and contained. Alfortville has the feel of a place with its own history separate from Paris, but a bit down at heal. There is some graffiti "Alfortville 94" - the postal area, I wonder if the local people / gangs have a pride in there non-Parisian identity like in Saint Denis.

With B awake we jump on a bus headed for the Bois de Vincennes, just over the Marne back near the 12ar.
Posted by Barbaresi and Round at 02:26